FOR ONLINE PAYMENT PLEASE USE THIS LINK

Get your education today!

Get your education today!

Pratibha Niketan Education Society was founded by eminent freedom fighters like late Shyamrao Baba Bodhankar, Balchand Muthaji and many others who were the disciples of Pujya Shri Swami Ramanand Teerth, a Sanyasi activist and leader of the Hyderabad Liberation Movement of 1947. They were the visionaries and the makers of the Marathwada region who wanted to liberate education from the domination of Urdu language.
They were the prophets who replaced elite, bourgeoisie education with mass education in this region. With a view to imbibing the ideals of social justice, democracy, secularism they found it meant educational sense at places like Aurangabad, Ambejogai etc. The aim was to castigate illiteracy, ignorance from the social psyche. Believers, as they were of a casteless, classless, secular society, these Founding Fathers of the Institution worked hard to imbibe in the minds of youth of Marathwada the ideals of educational values as well. 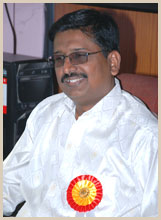 Another positive aspect of our College is that it is centrally located in the heart of the city with a sound connectivity from every corner. We have a sprawling campus with all the amenities required for the students. Students can make use of the state-of-the-art Language Laboratory for improving their aural and oral language skills. Our library holds a massive treasure trove of books out of which some belong to rare category.


We have also introduced innovative teaching-learning practices by using projectors for audio-video presentations which enrich the whole education process. I convey my best wishes to those students who are becoming our part for the first time and hope that the next few years will be fruitful and a glorious part of their life. I want all the students and their parents to be convinced that we not only educate your children, but motivate them to dream for a more sustainable future.